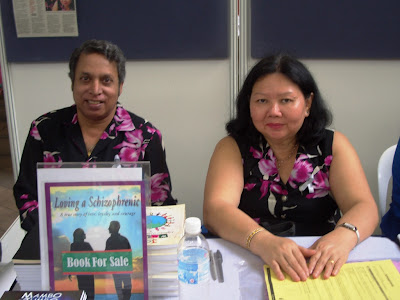 The writer of this article, Raymond Anthony, seen here with his wife
at the opening of Silver Ribbon on 4 Feb 2006

I just could not believe my eyes when I read the report in The New Paper about DJ Glenn Ong’s degrading comments about the mentally ill (‘Put these mad dogs to sleep’, TNP, Sept 20.) Ong’s offensive and insulting comments have hurt many people, including caregivers like myself who have the courage and conviction to care for their stricken ones despite the journey being an arduous and lonely one. Lonely and arduous, partly because insulting comments about the mentally ill continue to make it practically impossible for society to accept that people with mental illness are also human and need love, understanding and support.
People with mental illness have been unfairly labelled psycho, mad, freak, siow and what have you. In making reference to psychiatric patients, DJ Ong humiliates the mentally ill by going on air and suggesting that, “If you have to put these mad dogs to sleep, then you should.” When a conversation only focusses on negative comments, you will invite more and more humiliating remarks.
I am perplexed that such hurtful and offensive comments against the mentally ill can be allowed to be aired on a national broadcasting station during prime time when listenership is high. These remarks Ong mentioned on air could send the wrong signal to the public – that the mentally ill are all trouble makers. This is far from true.
At a time when the Government wants to build a gracious, cohesive and inclusive society where every citizen matters, such behaviour on the part of this DJ is totally unacceptable.
Let us not forget that social stigma can cause low-esteem for the sufferers and may become a barrier to everyday opportunities and activities, including jobs and education.
Broadcasters have a moral duty to inform, educate and entertain its listeners and viewers. In highlighting two cases of mental patients causing disruptions which DJ Ong encountered, what was Ong trying to put across?
Mental illness is clearly a misunderstood illness in many parts of the world, Singapore included. When people don’t understand mental illness, they become biased against the sufferers. This is why promoting education on mental illness is relevant to everyone. But attitudes must change, and this is where the media plays an important role.
The media must be held accountable because if it portrays people with mental illness inaccurately, such stereotyping makes it harder to change mindsets. In America, psychiatric patients are major contributors to American life – from the arts to the sciences, from medicine to entertainment to professional sports.
When educating the public, the presenter needs to present different perspectives on any issue. In the case of psychiatric patients, there are many who, with treatment, can go on to lead a perfectly normal life. This has not been highlighted. Why? Why only paint one side of the story?
Social stigma can cause low-esteem for mentally ill people and may become a barrier to everyday opportunities and activities, including jobs and education.
I have gone on national TV, radio and in the press to speak about my wife’s battle with schizophrenia and how I have helped her to move on in life; using the literary skills that she possesses (my wife is an author of 6 books). I tap on her strengths; not on her weakness. I’m proud of my wife and I would like her to be a role model for others in her condition to emulate, so that those who are living in the shadow of life will one day get to see “light at the end of the dark tunnel.”
I have spoken candidly about my wife’s illness, not because I want sympathy, but because I want acceptance, just like all in my wife’s condition long for. I have put in tremendous effort coupled with so much emotional pain and suffering to help my wife in her “recovery” and I certainly do not want such negative and insensitive remarks on the part of DJ Glenn Ong to demolish what I have built over the years.
World Mental Health Day is just around the corner – 10 October 2011, so please spare a thought for psychiatric patients and their caregivers who are one of the most neglected in our society.
I look forward to DJ Ong’s apology.
Sincerely,
Raymond Anthony Fernando
Caregiver
For responses and comments to his letter, log on to:
http://theonlinecitizen.com/2011/09/dj-glenn-ongs-deeply-hurtful-comments/
Posted by Dr Ang Yong Guan at 4:11 AM 1 comment:

MORE general practitioners (GPs) are caring for mental patients transferred to them from the Institute of Mental Health (IMH) under a move to involve primary-care doctors in managing mental illnesses in the community.
Forty-eight GPs are now monitoring 1,060 such patients, up from 2009 figures, when 34 doctors were tracking 560 patients.
Click below to read the article online


http://www.straitstimes.com/Singapore/Story/STIStory_693310.html
Posted by Dr Ang Yong Guan at 1:34 AM No comments:

More to be done for the mentally ill

From the Straits Times 5 March 2011
Log on here to read the full article:
http://www.straitstimes.com/Singapore/Story/STIStory_641638.html 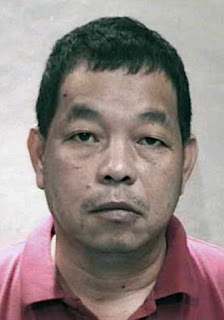 EVEN as he strangled the teenage girl, intermittently smashing her head against the floor, former private bus driver Ong Pang Siew kept apologising to her. After his 15-year-old stepdaughter passed out, Ong alternated between laughing and crying - kneeling next to her, sitting on her and banging his head against the wall.


He also made two phone calls - one to his boss to say he could not work the next day and the other to his brother, saying he was going to commit suicide. Ong, who was 45 at the time, also asked for his ashes to be thrown into the sea. Ong's bizarre behaviour showed that his mental state was abnormal at the time, the Court of Appeal ruled yesterday, as it overturned a murder conviction against him.

The appeals court said Ong was suffering from depression, which reduced his responsibility for the killing. Ong was convicted of the lesser charge of culpable homicide and is now looking at a maximum sentence of life imprisonment - instead of the mandatory death penalty for murder.

He had been sentenced to hang by the High Court in March last year for strangling his China-born stepdaughter, Pan Hui, in her Marsiling home in October 2007. Two weeks before the killing, Pan Hui's mother, Madam Xiu Yanhong, was granted a divorce from Ong and custody of the teenager and their son, who is now seven.

In July, Ong appealed against the murder conviction. His lawyer Subhas Anandan argued the man did not intend to kill his stepdaughter and that even if he was legally responsible for Pan Hui's death, he was suffering from a mental illness and qualified for the defence of diminished responsibility.

Defence psychiatrist Tommy Tan had diagnosed Ong to be suffering from a major depressive disorder. But prosecution psychiatrist Jerome Goh, from the Institute of Mental Health (IMH), testified that Ong did not suffer from mental illness.

Yesterday, the appeals court, comprising Chief Justice Chan Sek Keong, Justice Andrew Phang and Justice V. K. Rajah, held that Ong had intended to kill or cause lethal injuries to Pan Hui.
However, the judges found that Dr Tan's diagnosis provided a more convincing explanation for Ong's behaviour at the time. Justice Rajah, who delivered the decision, said the court had based the decision on a critical examination of the testimonies of the two psychiatrists.

The first factor, he noted, was that defence witness Dr Tan had conducted his interviews in the Hokkien dialect, which Ong was more comfortable with. In contrast, Dr Goh, testifying for the prosecution, conducted his examination in Mandarin.

Second, Dr Tan interviewed more people who had interacted with Ong to get a more detailed account of his mental health while Dr Goh interviewed two of Ong's siblings and focused largely on their personal history of mental disorder.

Third, although both psychiatrists knew that Ong had a family history of mental illness, Dr Goh placed less emphasis on this factor.

Dr Tan, who has 15 years' experience as a psychiatrist, had testified many times for the prosecution in death penalty cases. Dr Goh, an associate consultant at the IMH for eight years, was testifying for the first time in such a case.

Ong will be sentenced by the High Court at a later date.
Posted by Dr Ang Yong Guan at 6:12 PM No comments: 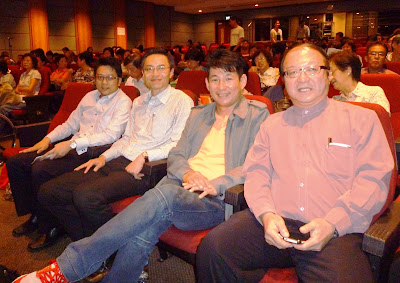 Dr Ang touched on the topic of how to build resilience and mental immunity to manage stress and to avoid the negative consequences of stress. 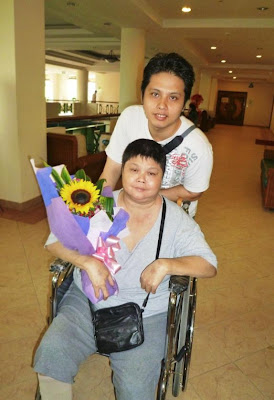 Mdm Tan, seen here with her son, was one of the 2 patients who shared about her personal battle with diabetes mellitus and the amputation of her leg and how she coped with the ordeal. Her son said that over the last 8 years, it was also difficult for him to see his mother suffer. He went through stages of denial, anger, bargaining before he finally came to terms with his mother's illness and accept the need and responsibility of looking after her.

AGMI members in front of AGMI booth.
(Click on the photo to enlarge it) 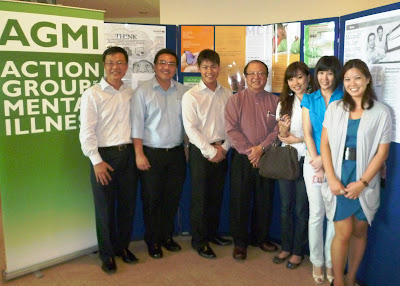 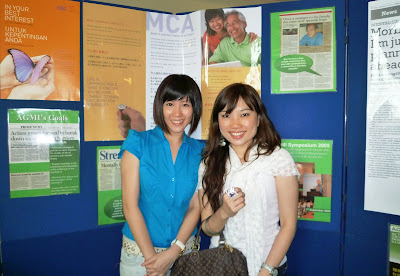 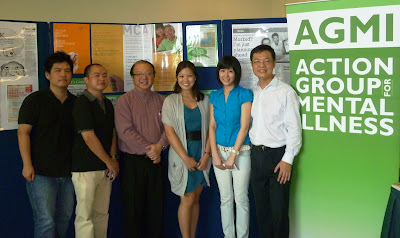 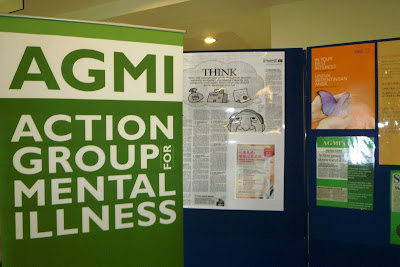 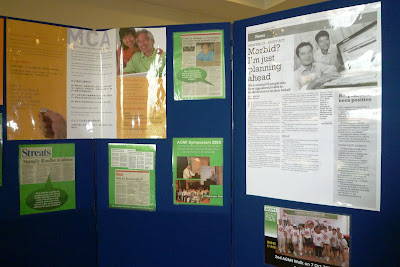 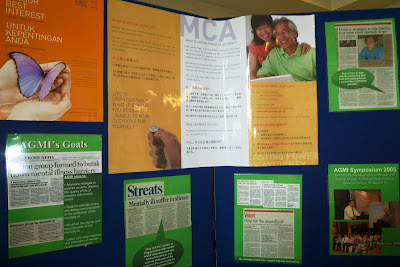 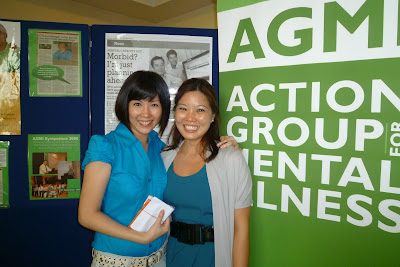 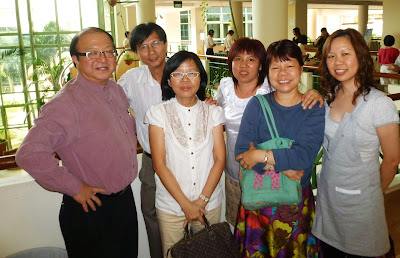 AGMI Chairman Dr Ang posing with some members of the audience.
Posted by Dr Ang Yong Guan at 11:50 PM No comments:

AGMI is participating in Mental Health Forum on 9 Oct 2010 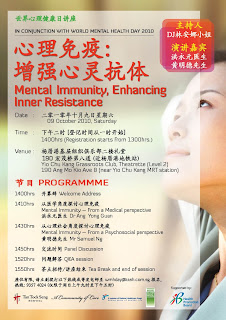 Interested public can call 9357 4027 or email to wmhday@ttsh.com.sg for registration.
Posted by Dr Ang Yong Guan at 6:16 PM 3 comments:

Prime Minister Lee Hsien Loong launched the 2007 National Healthy Lifestyle Campaign, called Healthy Mind, Happy Life, at the Botanic Gardens on . He called for mental illness to be de-stigmatised.
'If you say, you're sick, it's okay. If you say your mind is not so good, then people think something is not right with you,' he said. 'So I think it's good to bring this subject up and encourage people to look at it positively and do something to improve the mental health of Singaporeans.”

Health Minister Khaw Boon Wan told the Straits Times (ST 24 Sep 07): “The stigma still associated with mental illness is a real problem here. In the , people will seek psychiatric help to deal with their stress and estranged couples will get counselling. Such an attitude helps destigmatise mental illness and fosters early treatment. Asians tend to sweep such problems under the carpet and pretend that they do not exist. But they won't go away.”

“Singaporeans are deeply prejudiced against people with mental illness, causing some not to seek treatment early and posing an obstacle to their integration into society. We cannot claim to be a truly inclusive society unless we are prepared to show greater compassion, understanding and support to fellow Singaporeans who are suffering from mental illness.” See her letter to the ST Forum on

· To advocate changes in policies so as to improve the quality of life of persons with mental illness.

· To support activities in the prevention and alleviation of the suffering of persons with mental illness.

· To minimise stigma and discrimination of persons with mental illness. 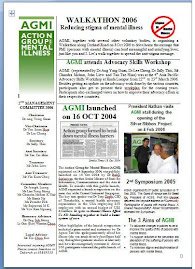 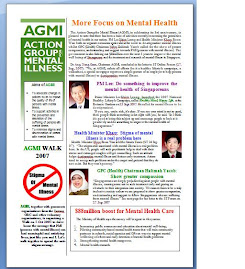